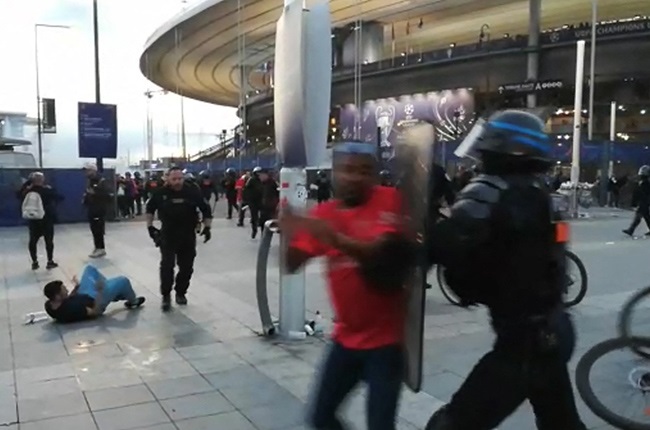 The video was taken from an AFP video showing police intervening as fans climbed the fence of the Stade de France ahead of the UEFA Champions League final. (Photo by Maryam EL HAMOUCHI / AFP)

UEFA apologized to spectators for the first time on Friday for their “scary and harrowing” experience ahead of the Champions League final, saying no football fan should have experienced such turmoil. so.

Thousands of fans were unable to attend the decisive match between European clubs despite having genuine tickets, amid the chaos that saw French police use tear gas at close range even against children. em.

“UEFA would like to sincerely apologize to all spectators who experienced or witnessed the terrifying and painful events during the UEFA Champions League final at the Stade de France on 28 May 2022 in Paris, on what should have been a celebration of European club football.

European football’s governing body said: “Not a single football fan has been put in that situation, and it won’t happen again.”

Spanish giants Real Madrid beat England’s Liverpool 1-0, but the match was completely overshadowed by the chaos outside the stadium.

Before the match, thousands of Liverpool fans with tickets had to wait for hours to enter the field, and the police used tear gas and pepper spray on the crowd.

Some Liverpool supporters said they feared being squashed after small holes were used to filter the queue.

Many fans on both sides also reported being assaulted and robbed outside the stadium after the match.

The chaos sparked anger in Britain, political uproar in France two weeks before legislative elections and raised questions about the French capital’s ability to host the Olympics in 2024.

UEFA commissioned an independent review led by former Portuguese government minister Tiago Brandao Rodrigues and aimed to find out the responsibility and omissions of those involved in the organization of the final.

“UEFA wants – and needs – to understand what happened during the day of the final, and identify lessons learned to ensure that the actions and events of that day are not repeated,” it said. know in a statement.

“The review will seek to establish a full picture and timeline of what happens during the day, both in the stadium and the surrounding areas, including examining the audience flow to the stadium. across different access points,” it said when publishing the terms of the reference.

The review will include security, ticketing and finals planning and will also look at fan meeting points.

It will engage with UEFA, fan groups, Liverpool and Real Madrid, the French Football Federation (FFF), police, stadium operators and other public authorities.

“More information on how the interested parties can submit their testimony (via a dedicated email address or online questionnaire) will be announced shortly,” UEFA said.

The review will begin immediately and be completed in the “shortest possible timeframe” and then present its findings, conclusions and recommendations.

Once completed, it will be published on the UEFA website.

French Interior Minister Gerald Darmanin has faced charges of lying after he blamed the chaos on big ticket fraud, and has since admitted that the organization around the final was “obvious” clear” was better.

The Champions League final kicked off 36 minutes late due to external problems.

If UEFA’s communication “is not ideal on Saturday … then the main thing is that it is there, and puts pressure on” Darmanin, the FFF and the Paris police, “so that they realize that the supporters are victim of what happened,” Evain added.